Inno-bombarda is the name of a new, patented, Danish designed bombarda float from 2014. It solves a number of problems experienced with the traditional bombardas. This new bombarda float is clearly the most exciting news within bombarda floats and castdub in decades. And the demand for minimal snarl combined with long cast, is solved better than some other floats on the market.
The float, which has been invented by the Dane, Martin Buch, does not resemble any existing bombarda floats. It addresses the problem of fly-back of the tackle perfectly when it is fitted with a fixed attachment at each end. The float does not have a guide stick at the back but rather an integrated anti-snarl INNO stick in the front. The combination of the fixed attachment and even the unique construction means that it is almost impossible to get snarls – even when you cast under the most difficult conditions – i.e. strong back-wind or side-wind from the casting arm. But not only is it snarl-safe, it also casts excellently. In addition, the float keeps the depth even at high speed, gives perfect performance and is extremely easy to attach and detach. The float can be easily changed with a snap at the back end and this also gives great flexibility as it can also be used with only the snap at the back as a weight for spin fly fishing in fast flowing water. Because of the tip, which drags along the bottom, it does not get stuck easily. 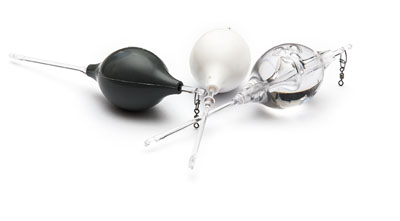 The fixed attachment to which the INNO stick is attached to the main line with a small lure lock so the stick cannot slide forwards and cause fly-back is, in my opinion, clearly the best and easiest to use and the most snarl-safe. Regardless of whether you cast with a guided cast, quick flick or the line attached on the surface, it does not snarl. However, the INNO bombarda can also be attached so it slides with a loop at the end of the main line, but this places greater demands on very uniform and evenly accelerated casting where the line is fully stretched – all the time. The sliding attachment can also be semi-fixed by pushing a piece of thick silicone tubing over the loop after which the tube is pushed up onto the back end of the stick all the way up to the float. But again – the snap is much easier to work with in practice – and is almost just as elegant purely in terms of performance.
INNO bombardas from www.bombardashop.dk are available in float, intermediate and sinker versions with weights from 15-35 grams.

As anglers we use a great deal of time and spend a great deal of money on equipment – clothing – rods – wheels – and finishing tackle, which we buy in order to catch more fish. The contact between us and the fish occurs through one thing – the hook. With the traditional and well-known fishing techniques we use today, even experienced anglers lose about 50% of the fish contacts. To minimise this problem, Jens Bursell from Fisk and Fri magazine has developed new attachment techniques, e.g. L-rig and Releasefly with small treble hooks, type Owner ST 36 BCX, size 12-18 for tubeflies.

For a few years, Jens Bursell and his test anglers have kept statistics on the landing rates with normal coastflies and small hook tackle. The result is the following. Traditional single hook flies size 10-2: 1001 contacts, 429 landed = 43 %, tubeflies with L-rig 688 contacts, 628 landed = 91 %, large coastflies on release fly: 371 contacts, 330 landed = 89%. In practice, you can double your catches by changing to small hook tackle. The differences are all statistically significant (X2, p < 0.001) – among these, 15 fish are more than five kilos and up to ten kilos.

During the hook and the fight there is appprox. 1 kg pull on the hook and rod. The small hooks mean that the tip and barb penetrate easier into all the places in the fish’s mouth, in the tough jaw too where the large hooks cannot get a grip at all. Owner ST 36 BC X

The best hook for the purpose is the treble hook Owner St 36 BC X, which is used with tubeflies. For the larger flies, sizes 12-14 are used and for smaller flies, sizes 14-18. 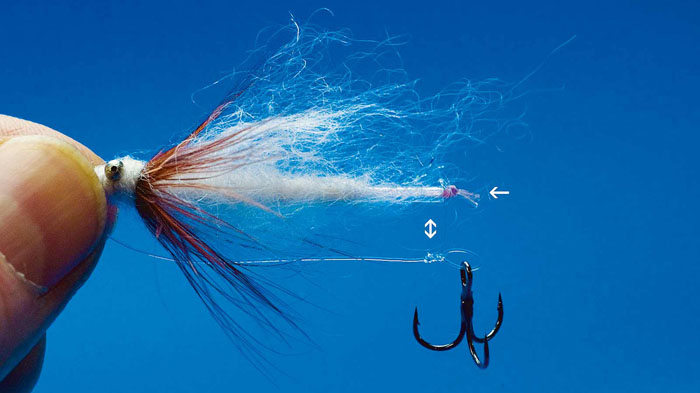 The elastic-release tubefly gives an extremely high landing percent and is an obvious way to perfect your bombarda fishing. The advantage of this tackle is that the hook can move forwards and hook the fish – even though the fly is locked between the jaws. This is not possible with any other fly system. This is a super-effective method with a landing rate of more than 90% – especially for bombarda fishing.

L-rig is the simplest attachment of tubeflies and it takes just 40 seconds to do it. Here, the semi-fixed version is shown, which is the best all-round solution for the majority of the small to medium-sized flies. 91% landing rate. 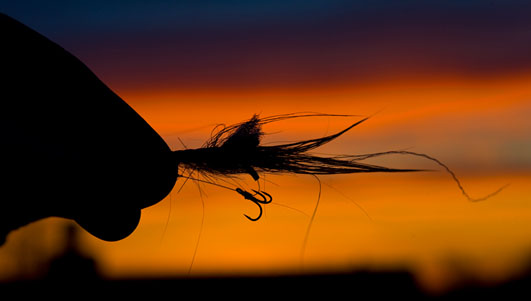 Release fly – here with loosely hanging hook. The fly is tied on the single hook where the tip of the hook is cut off. The hook tackle is semi-fixed on the remaining hook gap with a piece of silicone tube. In front, the line is attached in the hook eye on the single hook with a fly snap size 2. This tackle is the best choice for the slightly larger flies, such as “Pattegrisen” and “Tobis” flies. The hook can also be attached tightly with not-a-knot. 90 % landing rate. 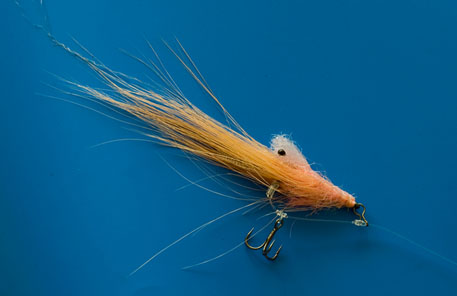